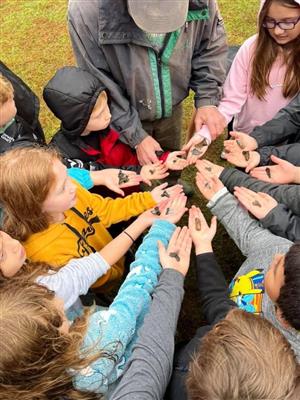 Even though it was a cold and rainy day, the fourth graders at Woodstock Elementary School thoroughly enjoyed their field trip to Shark Tooth Creek in Aliceville, Alabama on October 29th.  They enjoyed learning about the history of why the shark teeth were there. Then students eagerly searched the creek banks finding teeth and putting them into their baggies.  Students enjoyed comparing their findings and spending time outside of the classroom. The two students whose baggies weighed the most received a prize. Kylie Parker and Cleiver Lopez won those honors.  Also, Sophia Trammell and Connor Davis, the two students who found the biggest teeth, were awarded prizes.  AJ Palmer, a fourth grader in Mrs. Lightsey's class, stated that he was excited to go on the field trip and to see the big and small shark teeth in the creek banks. Sophia Trammell, also in Mrs. Lightsey's class, said that she never dreamed there'd be that many teeth in the creek.